Cameron McLaren is a Perth based award winning stand up Comedian, Event MC and Host. After 7 years performing Cameron has experience with every type of audience.
Cameron has spent a over 6 months on the road doing regional gigs as well as performing on more than 50 different mine sites… 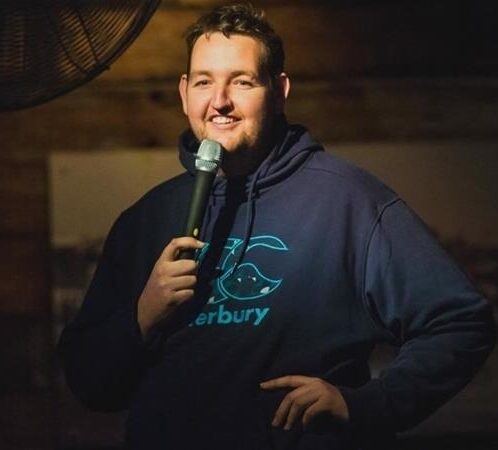 Cameron McLaren is a Perth based award winning stand up Comedian, Event MC and Host. After 7 years performing Cameron has experience with every type of audience.
Cameron has spent a over 6 months on the road doing regional gigs as well as performing on more than 50 different mine sites.
Regional tours include Supporting Pete Rowsthorn in the South West, Multiple Outback Comedy Fest Mine site tours and Stand up shows in Geraldton, Bunbury, Carnarvon, Exmouth, Port Hedland and anywhere else in WA with a stage. Cameron has proven versatility with the ability to entertain and engage the audience with clean and blue / dark humour.

AWARDS
* Best Comedy WA Fringeworld 2017 – Winner for debut stand up comedy hour ‘6056’. A love letter to growing up in Midland. Perth Fringe.
* Laugh Resort Comedian of the Year 2017 – As voted by peers. Comedian of the Year awarded by the Laugh Resort, Perth Oldest continuing comedy club.
* Best Comedy Weekly Winner Fringeworld 2021 – Winner of weekly comedy award for “The Confessional” a comedy show that forgives your sins. 1 hour of improvised souls cleansing comedy.
* Telethon Audience MC 2014 – Present – Since 2014 Cameron has been lucky enough to be chosen to be the audience MC at Channel 7’s Telethon. The largest pre capita fundraiser in the world. Cameron’s job is to ensure the live audience (mainly children) are entertained and engaged during the ad breaks. Cameron is onstage for most of the night, taking over from John Deeks.

BOGAN BINGO 2014 – 2017
Over several years Cameron was the a host of Bogan Bingo Perth over 100 times. Bogan Bingo is an Australian themed bingo event played across the country at local sporting clubs, pubs and events. These shows ranged between 50 – 500 people audiences. Shows were all over the Perth CBD, as well as regional and mine site shows.
As the event Host Cameron’s role was to remain in character, ensure the audience were participating in the game, deliver the pre written jokes and material and riff when needed.
These shows ranged between 2/4 hours and involved raffles, auctions and over fundraising type activities.

PODCASTS / RADIO
Cameron has been the host of his own Podast ‘Movies Are Dumb” which was turned into a live stage show held in a movie theatre. Cameron was also the host of the live drive radio show on 89.7fm Thursdays in 2016. Cameron is a regular guest on the podcasts ‘The Hard Yarns’ and “Goat King Writers Club” as well as a regular guest on 96fm breakfast show.